My last post covered how I made and displayed the full garden of flowers for the spring 2011 Youth Theatre production of “Alice in Wonderland Jr”. Having done that, I moved on to the mushrooms and Rabbits house. 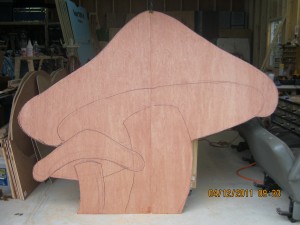 I made these 8′ wide x 6′ tall mushrooms much the same way that I made the pharaoh head for “Joseph”. Although it’s a lot of work, it’s certainly a sure way to have a set piece last for quite a lot longer than it would usually. Having worked quite hard to get the outer shape to be realistic, I went ahead and tried to get the paint to make them look like a place an enchanted cat, and pipe smoking caterpillar would like to settle down. 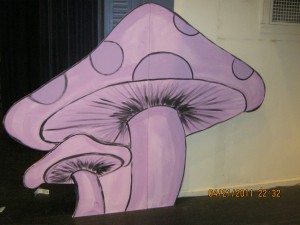 These being early on in my painting with colors career, I thought I pretty close to the mark and was quite proud to put these on the stage. I then moved on to the Rabbit’s house. 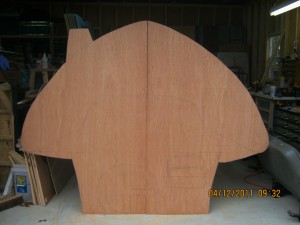 This cupcake shaped house is roughly the same size as the mushrooms, and is build the same way. 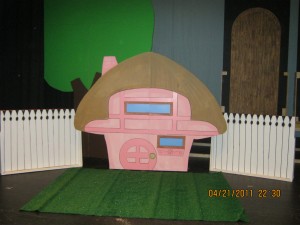 With nice little sections of fencing, and a tree in the background, you almost expect a rabbit in a big hurry to appear at anytime!!. As the costume Mom’s had no idea what the house was going to look like until I brought it in, I had to make a “really large Alice” costume version of the house as well, modeled here by my eldest assistant and right hand man. 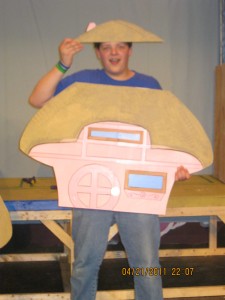 He’ll be thrilled to see that there. I was not really sure how I was going to stand the mushrooms on the stage, so I decided that I would just lean them against the wall and strap them to the proscenium with 1″ x 3″ lumber. This was of course not the most efficient way to get this done, but I hadn’t made any little jacks yet  so it didn’t occur to me. 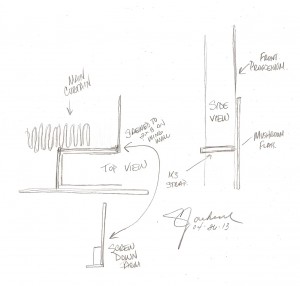 Well, I had made a little jack, but didn’t realize it at the time. In the illustration I have it labeled “screw down arm”. I just screwed that to the wing wall behind the proscenium, and then secured a piece of scrap wood between the flats and screwed them to the end of the arm. While it wasn’t efficient

, it was stable enough that 70 children bumping into it for the run of the show wouldn’t knock it down. The Rabbit’s house I mounted to jacks on a 2′ x 4′ rolling platform/dolly and it was rolled on and off the stage when needed. IN my next post I’ll discuss how I handled the quick change of the doors from big to little

, and then back again. Thanks for stopping by!!