At this point in my second career, I have started to develop as many time and money saving processes as possible. The colors I used on the “Into the Woods” set, would be the colors scheme that I transferred to the set of out Youth Theatre’s production of “Pinocchio”. I left the foundation levels for “Pinocchio” in an area adjacent to the stage after the strike of our Middle School Musical so I didn’t have to schelp that back and forth from storage. I have yet to develop the ability to organize my thoughts, and plans in a way that minimizes my “back and forths”, but I’m always trying to work on that.With three of the four six foot flats that I would need for “Pinocchio” rolling around on the set of “Into the Woods” I just had to get started on the stuff that I would have to fabricate for this summer show. I started by re-purposing one of my newer trashcans into a wishing well. 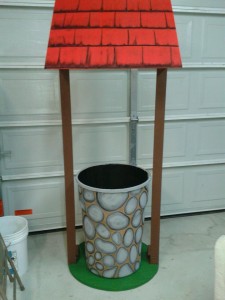 , the paint on the trashcan was temporary due to the fact that even the scuffed plastic simply didn’t want to hold onto the paint, but it would be fine for the run of the show. The next thing I made was a boat. This was an item that we did have in the Youth Theatre storage space, but it was so badly beaten and rotting, I decided that a new one was called for. 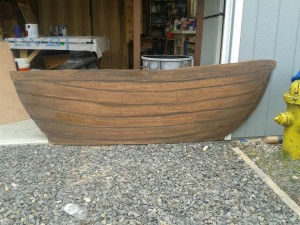 I was happy with the shape, and wood graining on this boat, but I was a bit disappointed with how the planking appeared at the back of the boat. With time getting crunchy though, I’d live with it. Another thing I have had to battle in all of this development is dealing with what “I” liked

, and what the directors would think is fine.

For Geppetto’s Toy Shop, we just brought out the house that We’d used in two other productions, and slapped this sign on it. It really looked great. For the scene changes, the director wanted an old fashioned type scene change card holder, with cards that indicated what scene was going on. 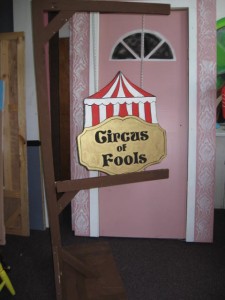 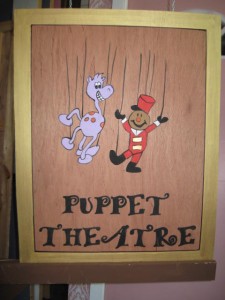 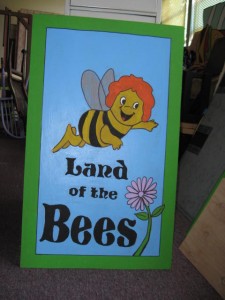 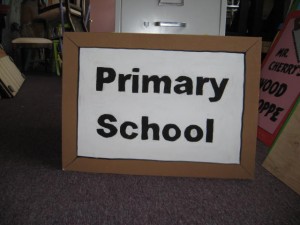 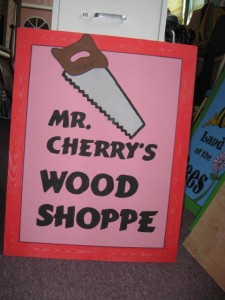 All of the signs above were used for the scene changes. Have I mentioned lately how much I hate the tediousness of sign painting? So for this little bit of unpleasantness

, I went all Huckleberry Finn on my kids and told them that they would not be able to help with the sign painting unless they behaved. Needless to say there was almost nothing they could do that would prevent me from “letting” them paint the signs

, but they didn’t know that . It was actually an activity that turned out to be quite fun as we all did it together on the workbench in the shop. After the summer of 2012 craziness was over, I was able to take a break, and just work my regularly scheduled job. The Fall craziness would start soon enough. In my next post

, I’ll cover how I start designing elements of sets for one show, with the intention of transferring those pieces to the next show, and we’ll also celebrate the end of Miss Hanigan’s Door’s stage career.  Thanks for stopping by.