With the “Joseph” set done, and the production in tech, I moved on to our High School production of “Guys and Dolls”. It seems that “when it rains it pours” really applies to our community stages because there is almost always shows going on, and as the groups don’t usually communicate, dates sometimes converge. Fortunately on this set I had a director that did not want a load of set pieces moving on and off of the set. She wanted to use curtained sections of the stage, dramatic lighting, and even gobos wherever possible, but there was a bar scene that needed the full magilla. So I was in luck! I had already built a bar for our production of “Curtains” a couple of years back, all I needed were four small bar tables and a “Hot Box” sign. 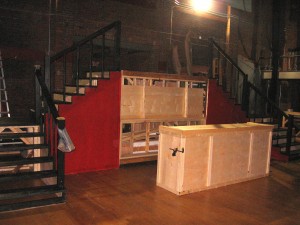 It was a great thought, until I went to find that particular bar in out community Theatre’s storage area with no luck what-so-ever. It was as gone as gone could be and with no clue where it could have gone, I had to add the building of a bar while we were in dress rehearsals for “Joseph”, and get them on the stage in the high school while we were doing the shows! So I built another bar just like the one from the above picture, and started on tables. 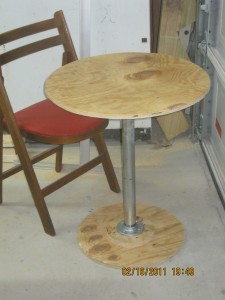 This was new territory for me

, I was essentially building the furniture for a full bar scene, so I wanted to get it done in a way that the tables could be broken down and reused. The chairs were retired funeral home chairs that I “Borrowed” from my brother.  At the end of this show, I would have all the parts for a decent bar scene at the drop of a hat, and would have no concerns with the bar disappearing because as we liked to do, we funded the build to maintain control over its use and storage. For the “Hot Box” sign, I pulled out the design I had used from the “Puberty the Game Show” sign, and added flames. 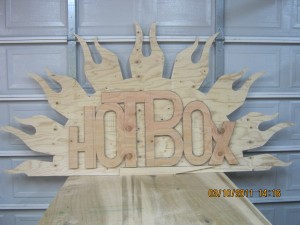 , and string some lights behind it for a back lit effect, but time was quite crunch at the the time of this build so I just turned it over to the director for the students to paint. Upon seeing how large the sign was the director then asked if I could make a way to mount the sign that rolled off and back on the stage. That’s when it occurred to me that this minimalist set had been quite a lot of work. LOL In my next few posts, I’ll be discussing how our Youth Theatre’s spring production of “Alice in Wonderland Jr.” got off the design page, and onto the stage step by step. Thanks for stopping by!!