Since March 20th, 2013, I have been making an almost daily blog post regarding my development as a local scenic designer, builder, and painter. I started as an enthusiastic theatre Dad, and over the last five years, have developed skills and abilities that surprise even me. Am I headed to Broadway, or Hollywood? Nope, not anytime soon, but I have developed ways of making sets for the stage that have certainly made getting the job done more easy for me. I know there are other theatre Mom’s and Dad’s that could benefit from my experiences, but more accurately my mistakes. Over these few years, I have striven to make what I was doing at the time faster, easier, less expensive, re-useable, and more easily stored. I believe that I achieved a level of success that again, has surprised even me. I am very proud of the accomplishments that I have made, and just as in the beginning of this “blogging adventure”, I wonder how on earth I was able to get it all done. In the time that I was able to do all of the things I blogged about, I also worked a shift that rotated days to nights every two weeks, did all of the usual soccer Dad stuff, maintained a house, had a new garage and and new kitchen installed, and still managed to get sets and/or props designed, built and/or painted in 35 shows up to and counting our Middle School production of  “Thoroughly Modern Millie”.  While Millie marked a milestone in my scenic career, my arrival at this show also marks my arrival at my 50th blog post. Even though it appears that no one ever reads them, I get a thrill with each time I push the button to “Publish” a post. I never envisioned that I would be someone that wrote 22,000 words about anything, but here we are. I think what I have done, and how I have done it is an interesting story, and I’m hoping that others do as well. So…having now said all that, on to Millie. As has become my habit now

, and being flash inspired by my director when she said the words “Art Deco”

, I made a quick sketch of what I thought the proscenium pieces should look like. 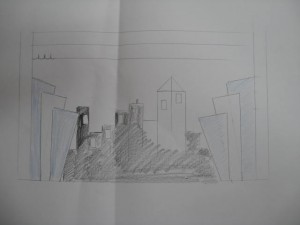 Of course, as I usually do, I initially went a bit big with the image, and didn’t really think it represented what I was thinking about and would take some very distracting explaining to the director I was working with.

So I did a more to scale proposal image. I said that I wanted the Proscenium pieces to be 16

, 14, and 12 foot flats set up against each other after being covered with shiny or sparkly fabric. I threw on what the side scenery might look like and when they idea was approved immediately got started on the complicated angles build. 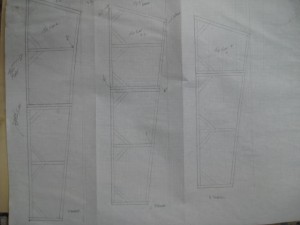 These are my initial drawings

, and if you notice, there are no measurements on it. I just went ahead and designed them using the measure of “that looks about right” and figured it out later.

Of course, not being all that math oriented, and usually thoroughly confused by angles, I did the math wrong and wound up with three pieces per side that were 16/15/ and 14 feet tall. I think they ultimately turned out looking great, but were quite a draw on the old 1″ x 3″ wood pile on something that I would very likely have a hard time incorporating into another show anytime soon. With my daughter sharing the role of Millie though, the investment of time and lumber was certainly worth making. In my next post I’ll continue with Millie, and demonstrate what design elements of this show I used to make the three week turn around time for the next show a bit easier to handle. Thanks as always for stopping by!!