Usually a production of “Thoroughly Modern Millie” calls for several doors for the hotel scenes, but the director for this show only wanted two for this Fall Middle School production. I actually have several doors handy, but only two were the same size. I put both on 2′ x 4′ rolling dollies using my new hockey stick supports. 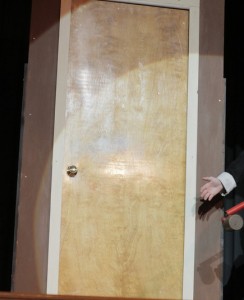 I found that they were more appropriate for a door installation due to the height and weight of the flat, and offered more stability than a traditional triangle would have. 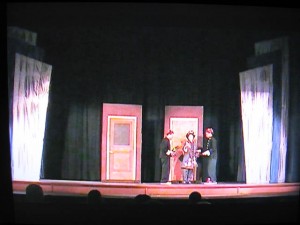 This particular director as I have said before, liked to get the kids involved with the painting, and they painted the door flats. Turned out though no one wanted to be the one that put new paint over Miss Hanningan’s door paint. So it would stay Miss Hannigan’s door for the run. 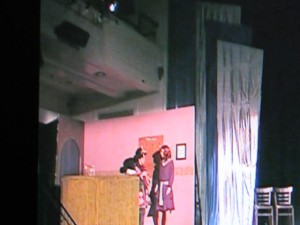 For the hotel office, I re-used the desk that I had made as bar for “Guys and Dolls” , and re-purposed a section of the Mother Tree from “into the Woods” for the archway. It was supposed to be repainted but the kids that were detailed to the assignment forgot about it, and by the time I noticed it, it was too late. The back wall of the office is three 4′ x 8′ flats painted over in a pink that would dominate the set of the show that I was getting ready for next. With the High School play on deck immediately after the Middle School musical, I decided that any time saving measures that I could take, I did. So all the “Wall” flats I used for this show were base coated in pink. The office walls were left with just a taped on border, but for the flats that I used for Grayson’s office, I got a new tool that I was very excited to try. 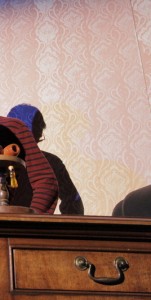 I had wanted to try a pattern roller for some time

, but hadn’t really needed to invest in the tool until I needed “Old Lady” wallpaper for the High School Production of “Arsenic and Old Lace” scheduled for three weeks after Millie. It was great to be able to have three of the flats already “old ladied” up, so the transition would bee less of a hassle. 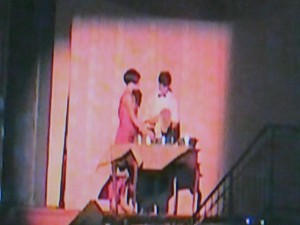 The pattern roller really added a nice texture to the plain pink walls and successfully made the setting on either side of the stage look unique even though they were the same color pink. The pattern roller was a bit expensive, but was well worth the investment. It’s a bit hard to maintain, and does appear to be wearing after what I consider only a few uses, but as long as I can get a few years use out of it, I’ll be happy. In my next post, I’ll be covering the transformation of one of my oldest, and most popular set pieces. Thanks for stopping by.