Well, I have been putting off this post for a while now due to the fact that I’m not really sure that I’ll have much to post about when it’s done. I intend to make a weekly post, but everyone knows how that goes. I look forward to posting all the new stuff that I do, but with the crazy summer season coming, I’m not sure how its going to work. I have recently built some awesome escape stairs that I’ll be using in a summer show, but I’m hesitant to post them until after the July production. I’m also probably going to start making posts regarding the development of my “regular art” and how I have developed there as well. It’s actually bee a lot of fun, but as always I’m still learning new techniques and tricks, and trying to get better at techniques that I have already tried. Anyway, the latest production that I’ll be posting about is our Community Theatre’s production of “Fiddler on the Roof”. As my retirement from my “day job” was scheduled to fall right in the middle of the run, I said that I would not be in the cast, that I would build and be on the crew if needed, but being in the show might be to much. After a small male turnout, the director contacted my wife and said that she needed men for smaller rolls. I said that I’ll do something small, and got cast as Avram the bookseller. 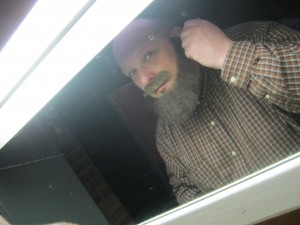 This would be my first experience with a beard and mustache

, and having had the experience, would be my last as well. 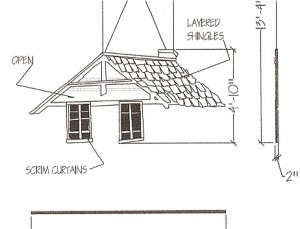 , and I reproduced them to the best of my ability. The pieces as drawn were flats, built to appear dimensional, so each individual piece of cedar shake roofing had to be shaped before it was placed on the flat. 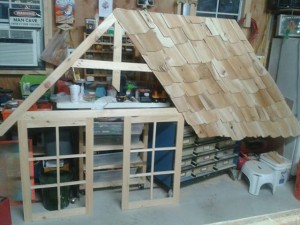 , but the widows separately and added them after being transported to the stage.

This is a picture of the four roof pieces that I built, along with a back drop that the director rented, and wood drops that are stock at our theatre. We are very lucky to be able to do our shows on a broadway grade stage with a full fly. The next thing that I did was make some fence pieces out of old palates. 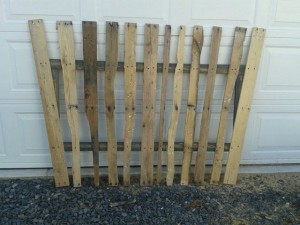 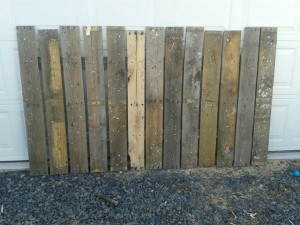 In the process of this

, I discovered that taking apart old palates was back breaking work, and no amount of properly aged wood was worth that amount of effort from this fat guy!! Having done all that…it was on to my “Fruma Sarah” rig. Fruma Sara is the ghost of one of the character’s dead wife

, and to be effective, needs to be larger than life. 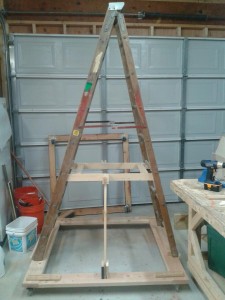 To be larger than life our actress would be standing on an eight foot ladder (that I trash picked) secured to a dolly with roller blade casters that I got at Harbour Freight. 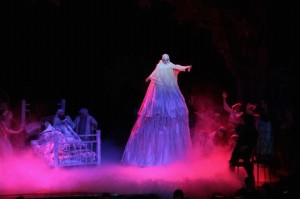 , and scary at the same time. For this show, I developed in so many ways. This was the first show that I had professional drawings to build from, and if I’m being perfectly honest, I found it a bit limiting. Over the last five years I had grown accustomed to building off the cuff from rough sketches. Nightly

, I watched Fruma Sarah do her thing on the stage fearing all the time that the actor rolling her around would run her right off the edge of the stage. Fortunately that was a fear of everyone involved so we took great care to avoid that. I successfully retired from a 25 year career, and started a new chapter in my life, and hoped that designing, building and painting for the stage would be a big part of what kept me out of trouble with my wife. I expect that I’ll be posting about the stairs I mentioned earlier because they are an exciting addition to our set foundation collection, but we’ll see!! LOL Thanks, as always, for stopping by!!