With this post, I’ll be writing about the last show that I did in 2012, and the next two will cover the first two shows of this year. I really thought that it would take longer than it has, and I have to say that I’m in a bit of a quandary as to what I should blog about next. I have some fun options that include some of the art that I have made, and how I made it, or even some of the techniques I used for painting the scenery. I’m not sure, but I’m going to keep posting as I do new shows, the two comments I have received really demonstrate the wild popularity of these posts, so I’ll keep plugging away. My last show of the 2012 season, was the High School production of “Arsenic and Old Lace”. This show required a static set that is simply the living room and dining room of two old sisters that, in doing Gods work occasionally poison and kill men they consider lost souls. This would be the show that we say goodbye to Miss Hannigan’s door. 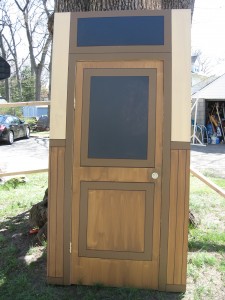 This door had been in many shows since I build it in the Spring of 2009, but it was time for change. I needed a front entry door, and had a beautiful Stanley door for the job, but it was way to heavy for this set, so I re-purposed Miss Hannigan’s door. 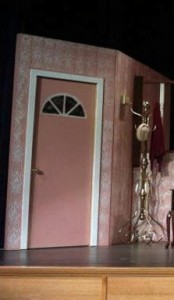 After a little bit of paint, Miss Hanigan’s door was no more. It was a sad day, but after this show, we have a nice looking front entry door. The pink paint I had used on the flats in “Thoroughly Modern Millie” was the color that I had planned for this show so that we could make the quickest transition possible. We had a three week window to transfer the set from Millie, to Old Lace, and one of those weeks involved the Thanksgiving break. The flats from Grayson’s office went right to the back wall next to the landing, and attached to the front entry door. 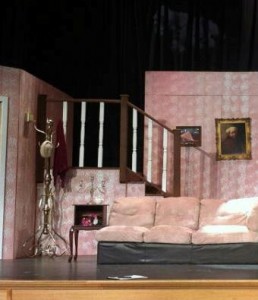 This was my first static room set, and I planned the landing and stairs with wall flats in between, but failed to account for the fact that the platform I was using would represent half of the height of the flats so the extension that I used in the window flats for Millie, was re-purposed to extend the flats by the landing.

It was a pretty simple, but effective set up that the kids really seemed to enjoy doing the show on. They had plenty of room behind the flats to get on and off stage, and really sold the direction to the basement and kitchen well throughout the show. 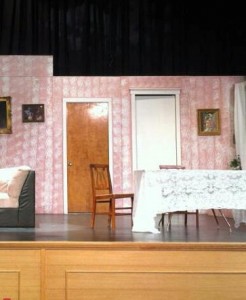 Having taken the basement door right off of the set of Millie, the only things I had to fabricate for this show was the kitchen door flat and a hatch in the top of the window box for bodies.

For the windows I just painted over the bricks I had painted for Millie, and mounted the flats on the window seat that I had put the hatch in. The window seat is a 24″W x 8’L x 18″H platform that I built for a 2009 private school production of Grease. When they couldn’t get two screws out of the top

, they threw it out, so I grabbed it and have used in several productions since. I just cut a hatch in the top for this show, framed out the hole, replaced the cut out and screwed on a piano hinge. 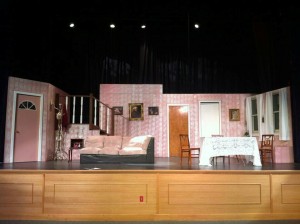 It was a set that I had very little time to get on the stage, but as I had planned for the transfer of the set from Mille to Old Lace, it went very smoothly. The kids really knocked this show out of the park, and really seemed to have a good time on the set. In my next post, I’ll be presenting space saving sets that we flew in and out for our Community Theatre p[roduction of “Fiddler on the Roof”. Thanks for stopping by.