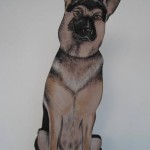 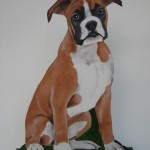 Having completed these few projects as practice

, I felt confident enough to do a project that had been running around in my head since Christmastime. I wanted to paint a portrait of a cat that we had when my wife and I were first married

, but had to adopt out due to the allergies of our first baby. We had initially adopted our “Moe” as a hospice case as he wasn’t expected to live out the year due to an ear issue. He was so little, and loving that we fell in love with him immediately

, and he us. Everyday he did something to let us know how much he appreciated us and how much he loved us for taking him in. But when our first baby came

, and was also allergic to him, we had to decide who was going to go. Now, as our first baby suffered from daily belly pains (Colic) and cried almost constantly, it was up in the air for a while whether it was going to be Moe or the baby going to my wife’s parents house. Ultimately it was Moe that got sent away, and even though he was still officially in the family, it really broke our hearts. When he moved to my in-laws, he was already three years beyond his life expectancy, and lived happily for another seven years with them!! He survived on love that he received, and gave. He was truly an extraordinary cat. 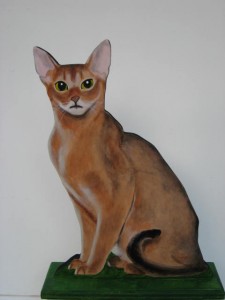 I found a picture that looked just like him, and made this painting of him so that we could have fond memories of a cat that was literally our first baby. There was no doubt that this image would never be available for sale as it looks identical to Moe

, and would have a spot in our home forever. 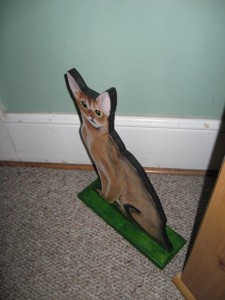 Right now he sits next to our TV stand

, but when I initially painted him, I sat him on the front window sill where he would sit all the time when we had him in life. He doesn’t take up much room at all due to the fact that he’s painted on 3/4″ plywood and secured to a base that lets him freely stand wherever I decide to put him for the day. 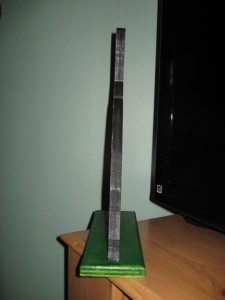 While we only have had his image in our house for the last week, it has been nice reminiscing with our children about a cat that we loved, and loved us back long before they arrived. Contact me at forensicartctj@aol.com if you would be interested in having a memorial cat or dog of your own. I have decided that I’ll do cats and small dogs for $350.00 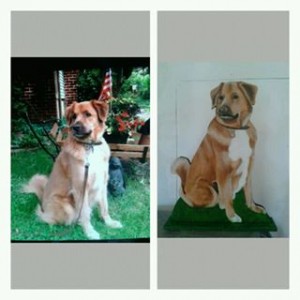 This is a side by side of the image that I did my first portrait from, and the freestanding 24″ tall

, approx. 19″ wide “Forever Rebel” that I made for a friend. I’m so glad to be able to do this, and I look forward to hearing from you. Thanks for stopping by.

Well, as it turns out

, set building has left me with some down time that I had not anticipated. I really thought that I would be able to fill all of my waking hours with all the set building that I had been doing while working a rotating shift

, but that just has not been the case. I decided that it was time to expand the services that we offer here at Magic Time Stage Craft to include animal portraiture, but in a way that I don’t see offered anywhere else. During the Christmas season of 2012, I was making wood cut outs of animals for a friend to paint for her family and friends, and one for her to paint for one of my co-workers when she said, “I’m glad to have the business

, but why don’t you paint this yourself?” Well that was quite a good question. The answer at the time was that she had painted all of the other Christmas ornaments that I had cut out for that same co-worker, so as a matter of visual continuity, I wanted her to paint the last piece as well. But after that, there really was no reason why I wasn’t making my own cut outs and painting them myself. So on May 17th, I decided to try a whole new thing and cut out a German shepherd shape, mounted it to a base, and painted it!! 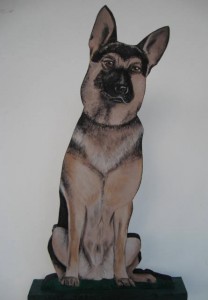 My daughter named him Buddy

, and he is now dog#1 and the official guard dog of by shop!! The idea of doing this had been sloshing around in my my for several months and as a result I had already compiled a list of dogs that I wanted to make painting of, and soon after Buddy was done I got started on Rufus. 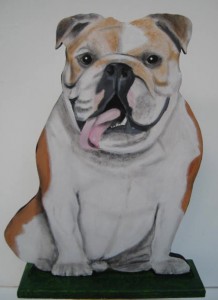 I love English Bulldogs, but I am not a real lover of the drooly dog types, so this is as close to the real thing that I’ll ever own. It occurred to me that I could do these with almost any image and one day after Rufus was done, I decided to try a Monarch butterfly. 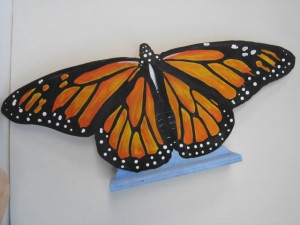 I wanted to really try and catch the brilliance of the colors in the wings of the image that I was painting from, and think I really pulled it off!! The next up was a challenging, wrinkly, multi colored Boxer that ultimately became known as Boots. 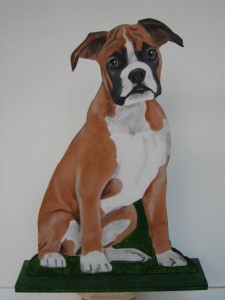 Now considering the fact that these are my first real forays into  the world of painting with color, I felt pretty happy with having gotten close at all. It was a bit frustrating at first, but the learning process has developed from frustrating, to a fun daily artistic challenge. My next challenge was a puppy that I found irresistible, and I really spent some time trying to get all of the nuances of the colors right on this one. 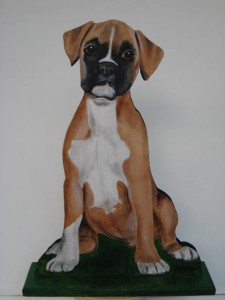 I was thrilled with how he was turning out

, and when he was finally done, many people were sure that I was posting a picture of a real dog!! What artist isn’t thrilled with hearing that, let alone one that makes art for the stage!! I was very pleased. In my next post I’ll discuss a cat that I painted in the image of a cat that we loved dearly while we had him

, and how I’m dealing with the requests for images that have started rolling in!! Thanks for stopping by.